Sam Houston Signatures
and other notable signatures for study only


All these items that are listed and imaged below have been Sold by me to clients.  They are imaged here for Study Purpose Only.


Sam Houston
Governor of Tennessee, President of Republic of Texas, US Senator Texas and Texas Governor 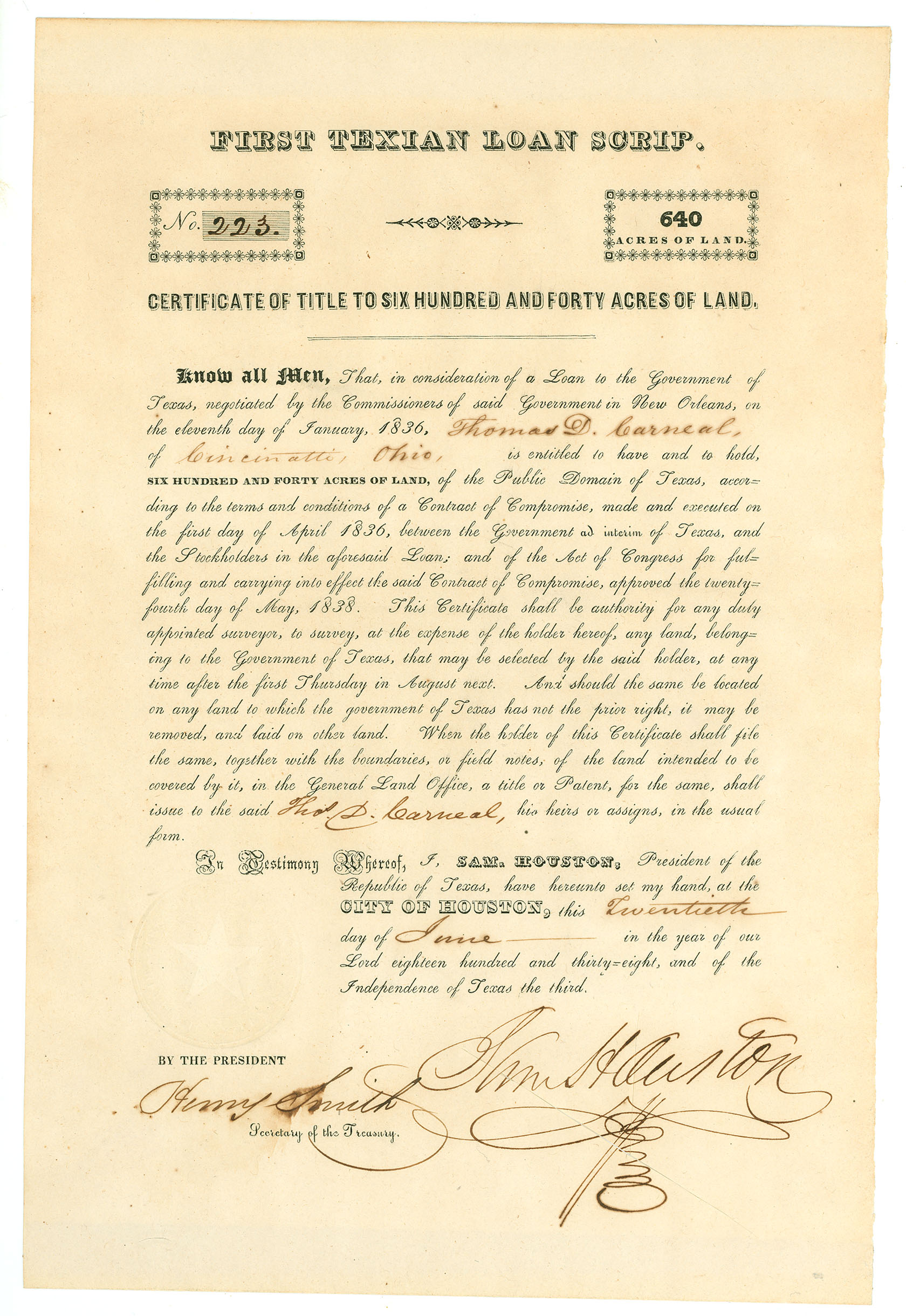 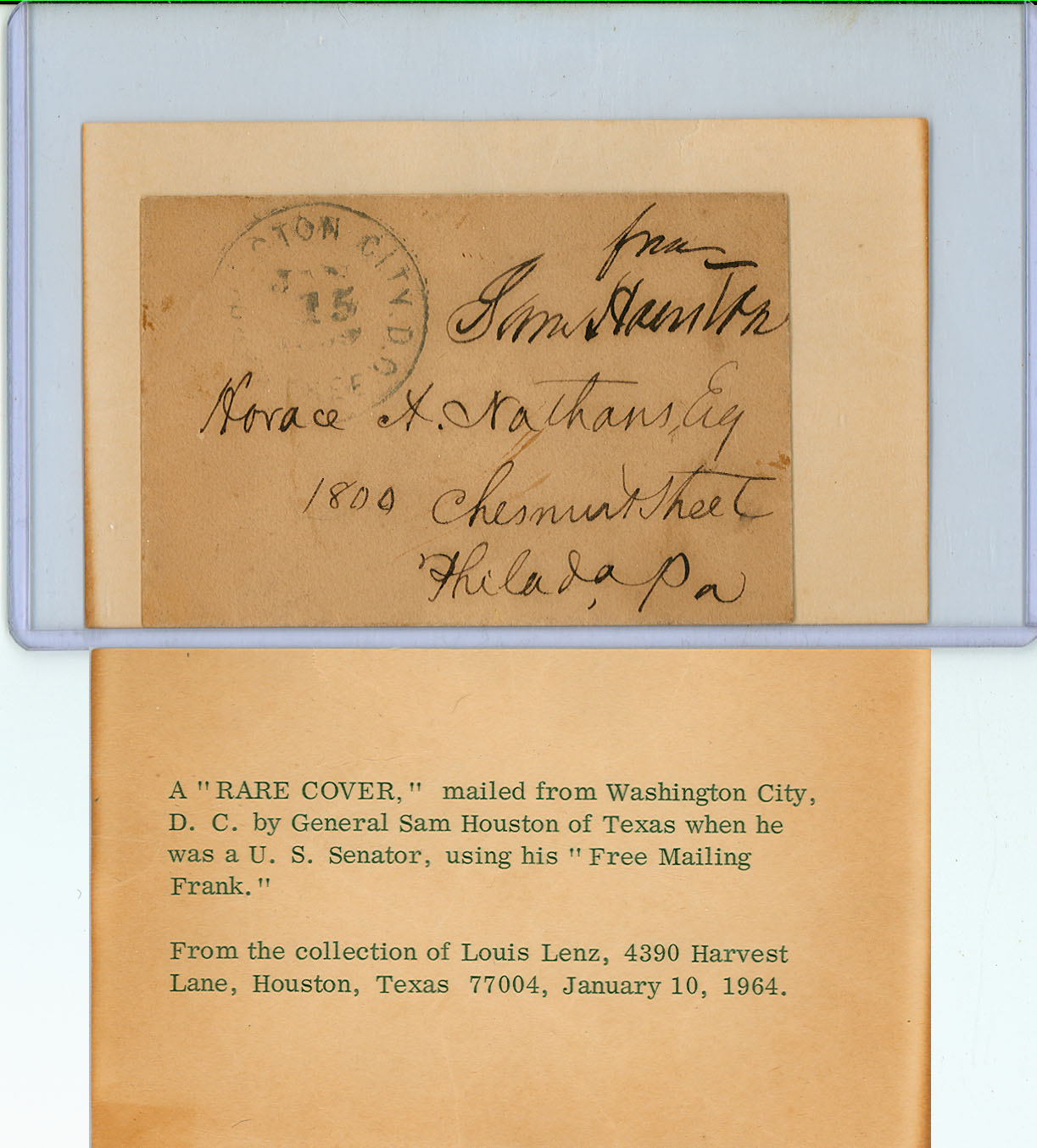 This is another Free Frank envelope from Houston's term as US Senator from Texas.  This Item has been: 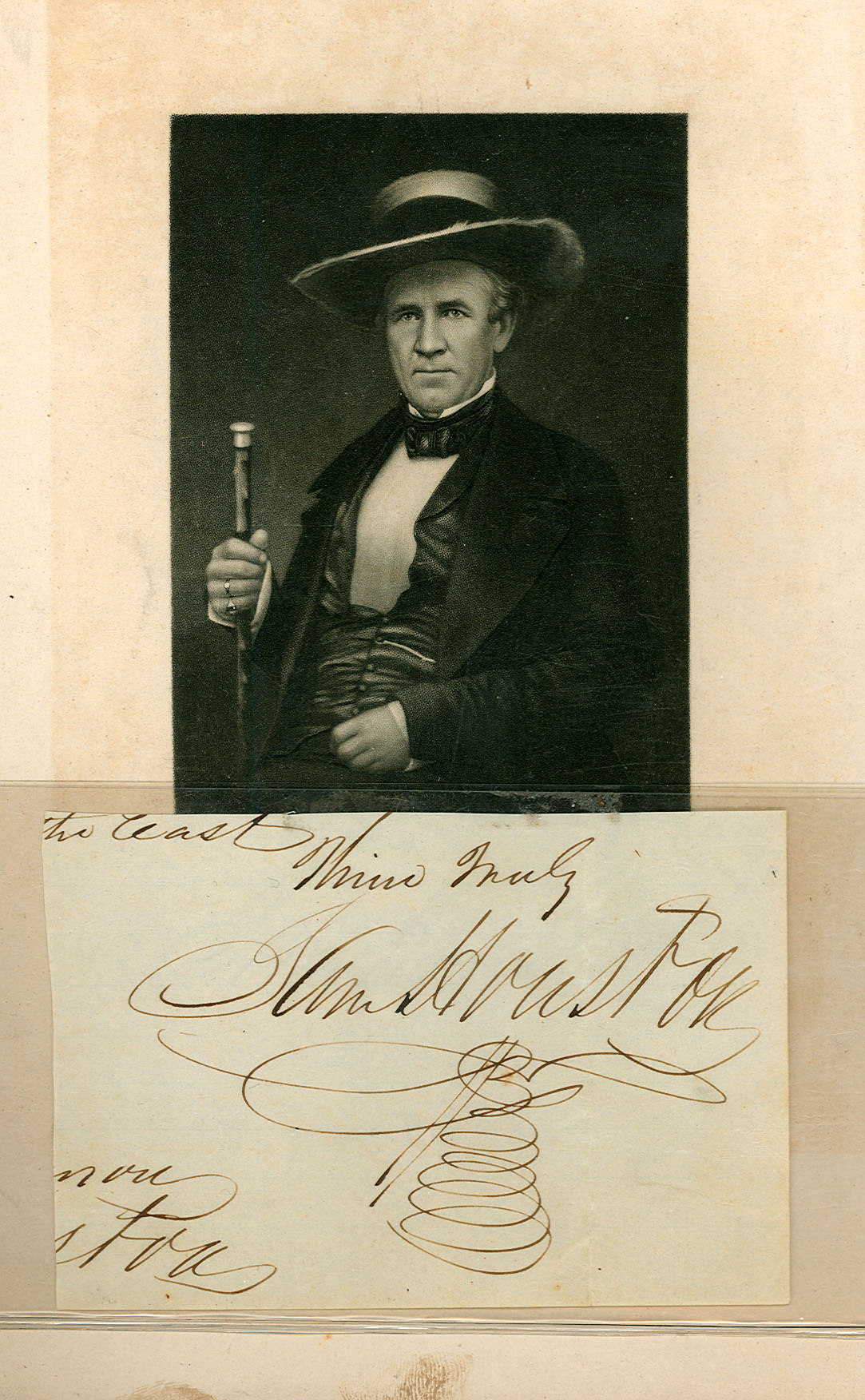 I could be wrong, but I believe this signature to be Late Republic.  It is like several others I've seen from 1845 when Houston was writing a lot of letters, answering requests and so on.  This is his ornate signature of the size usually seen on Republic fiscal documents.  If you look to the bottom left you can see part of his second signature as found after PS on his many letters.  They could have had two signatures on the same cut had this portion not been separated from the original letter.  The 19th Century engraving from a daguerreotype of Houston goes with the lot and would frame up nicely.  This lot has been:

This Sam Houston signature is cut from a Texas Land Patent.  It is dated 14 January 1861 Austin.  There is also a Texas State seal, nearly complete, to left.

This is an image of Sam Houston's signature foun on the back of a Pay Warrant as Governor for State of Texas in February of 1860.  This is the same fancy signature that I have seen on many early Republic documents.  Very similar to the 1845 signature above.

This has to be the neatest document that I've ever handled.  Sam Houston, who was not yet President of the Republic, signed this Certificate as Commander in Chief of the Texian Army.  It was about six weeks after San Jacinto.  He was in New Orleans recovering from his injuries that he incurred during the battle.  It was there that a private soldier by the name of John C.P. Kennymore approached him and asked to be PAID for his service in the Army.  Kennymore was one of Fannin's troops captured after a skirmish at Victoria.  He was one of 16 soldiers selected to build boats for the Mexican Army.  The rest of the captured soldiers were marched to Goliad where they were shot.  He escaped his captors and he may have been wounded.  He finally made his way to Velasco where he was discharged from the Army by M. B. Lamar who was Secretary of War.  Lamar spelled his name as Kenimore and wrote this in his discharge dated May 17, 1836, "In consideration of the great privation and sufferings encountered in the service of Texas as well as for his valor and fidelity".  Kennymore would have needed to go to Columbia to get his pay warrant.  He wasted no time getting out of Texas and likely got on the first ship to New Orleans where he ran into General Houston who saw that he got paid.

Jefferson Davis
President of the Confederate States of America

This is a post WAR check drawn on The Savings Bank of Memphis (Tennessee) dated 8th February 1872.
Image left for study purpose!
There is No Dot at end of Davis signature.  His wife Varina added a dot on her secretarial signatures for her husband.